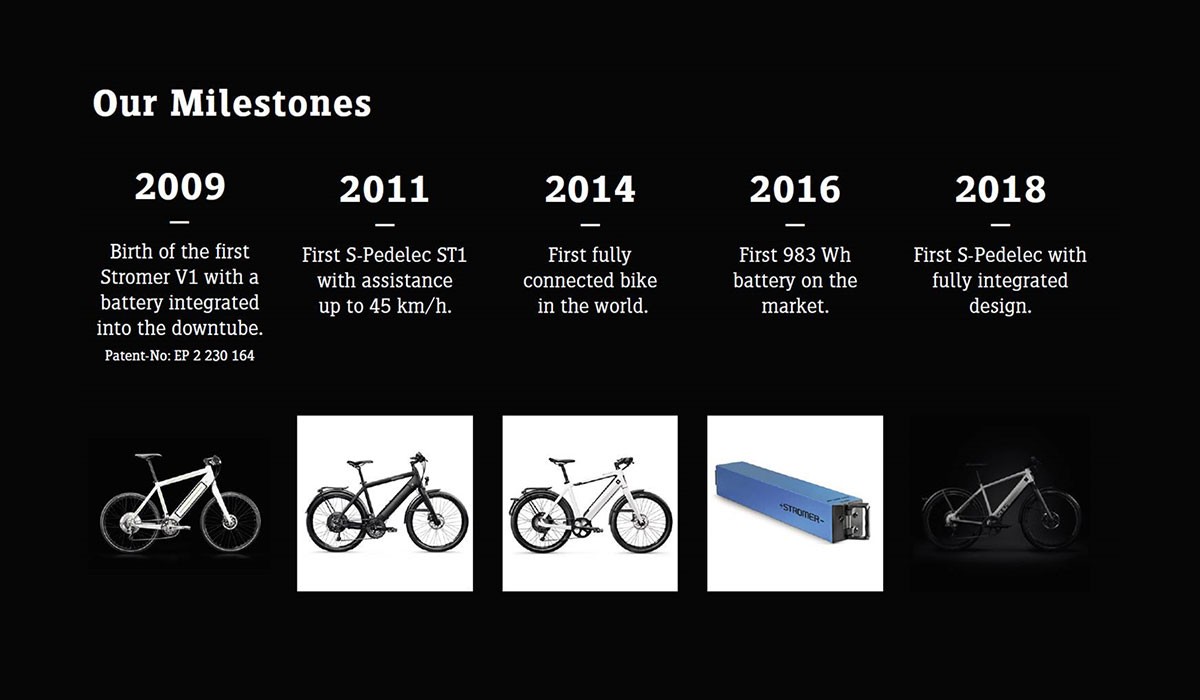 A portrait of Stromer from Laurens van Roojien.

People are fond of the word disruptive. It is a fitting description of Stromer’s role in the bicycle industry. The recipe for success for the company from Bern has always been following its own path. This courage is paying off ten years after the company was founded.

Three trends are currently dominating the e-bike sector: Batteries with higher capacity are being installed for a greater range, and batteries, cables and hydraulic lines are being hidden away inside the frame. As a result, modern e-bikes no longer look like homemade inventions from your garage, but instead are consistent products with a high level of integration. The third major trend in the e-bike sector is connectivity, meaning the connection between the e-bike and the owner’s smartphone and also with the manufacturer via the cloud. myStromer AG has been setting the respective course of these three trends from its Stromer Campus.

The battery was housed in the voluminous downtube as early as the first Stromer prototypes – truly a unique feature in 2010. From the very beginning Stromer has relied on a hub motor that is located in the rear wheel and provides solid assistance up to 45 km/h. In 2014 Stromer presented the “ST2”, the first e-bike that had its own SIM card and could be connected to a smartphone. This pioneering work was developed together with Samsung. With the display and LED navigation light integrated in the frame, Stromer used the “ST2” to take integration one step further.

Years before competitors offered a solution for operation with two batteries, Stromer customers were able to optionally equip their bike with a particularly strong battery – and thus significantly increase the range with the trade-off of some additional weight. The Stromer OMNI app from the company from Bern also disproved the preconception of clumsiness: This app made it possible to locate a stolen e-bike and thus get the better of thieves long before the competition offered this feature.

On the “ST5”, the current top model which has received a number of awards, Stromer has expanded the integration to include the handlebars and headlight – and used the finest parts in the process: The Di2 shifting system from Shimano changes gears electrically with equal amounts of precision and speed while the headlight from Supernova turns night into day. Hydraulic four-piston disk brakes and generously dimensioned brake disks enable powerful deceleration. The voluminous tires eat up bumps and still roll easily. For even more riding comfort, a suspension fork and a suspension seatpost are available as options.

In the wake of transformation of transportation, myStromer AG is focused on getting commuters excited about the dynamics and power of an e-bike. The potential is enormous: 20 percent of trips by car in Switzerland are under two kilometers and 45 percent are under five kilometers. CEO Jakob Luksch outlines the objective of myStromer AG as follows: “We want to sustainably improve mobility. For this reason, we are consistently focused on Speed Pedelec models that can achieve longer commutes at higher speeds.” This is why Stromer has been betting on fast e-bikes from the very beginning: These Speed Pedelecs offer assistance up to 45 km/h and are thus a viable alternative to a car.

In Switzerland, fast Stromer e-bikes have long been part of the streetscape. The market share in this class is 14 percent in Switzerland and a half a percent in Germany. Many EU countries have recently relaxed the regulations for fast e-bikes, however. The export business promptly took off. Around 12,000 Stromer bikes were sold in the company’s 10th year – half of them outside of Switzerland. “Leasing models in France and Belgium have spurred on sales. Additional EU countries are expected to follow if company bikes become eligible for tax deduction. But the legislation remains a challenge in certain countries,” states Jakob Luksch.

Anyone who has been successfully swimming upstream as long as myStromer AG should be able to rise to this challenge.