myStromer AG with a very successful anniversary year in 2019.

The reorganization from the previous years bears fruit. Following the successful turnaround in 2018, the corporate targets for the 2019 anniversary year were ambitious: Consistent quality management, the expansion of production to include two assembly lines at headquarters, the development of a company-wide, standardized process landscape and the relaunch of the legendary Stromer debut ST1 were all on the agenda.

With double-digit growth across the markets and the sale of over 12,000 Stromer bikes around the world, it was possible to exceed the targeted sales figures. The company was particularly successful in the Netherlands, where the market for the S-Pedelecs capable of traveling at 45 kph positively blew up. In 2019, growth was increased by 60.1% compared to 2018. With 1,558 sold bikes and a 47.2% market share, Stromer is the clear market leader in the S-Pedelec sector. But Stromer was not only successful in the Netherlands: The market leadership already established in the S-Pedelec sector was expanded in all major markets, particularly in Switzerland and Belgium. The market development in the specific countries depends strongly on the bike infrastructure and legal conditions.

“We are particularly proud of the 100% assembly of the models at our Stromer Campus in Oberwangen,” states CEO Jakob Luksch. “With three assembly lines and the systematic expansion of our team from 55 to 68 employees, we are able to react quickly to the demands of the market and are responsible for the quality management ourselves,” Luksch continues. The Anniversary Edition of the model ST3 was a good example of this. Introduced at Eurobike, the model with special paint and many extra features was already being delivered to stores before the last day of the trade fair. The relaunch of the legend- ary ST1 model also generated a positive demand: The first-class entry model in the Speed class of the fast e-bikes was initially introduced as a Limited Edition in the summer and then as a regular model in Europe and the USA.

Additional changes were made at Stromer for the 10th anniversary of the company: The relaunch of the digital presence was conducted in the fall. At stromerbike.com, it is now possible to compare all models, use the Bikefinder to select the perfect bike for your individual needs, configure it in just a few steps and contact a dealer. At the same time as the relaunch of the website, the overall appearance of the Stromer brand was reworked.

The company celebrated its jubilee in October together with all Stromer riders across the world: In a unique community event on October 10, 2019, they rode a potentially record-breaking cumulative distance of 473,000 km in 24 hours and thus far exceeded the goal of circling the globe ten times. 10,909 Stromer riders took part in this event, each traveling an average of 43.35 km. This proves that Stromer undoubtedly has one of the most active brand communities in the world. Stromer has continued to set new benchmarks in the fast e-bike class over the last ten years in terms of power, range, design and connectivity.

2020 shall see the market launch of the new ST2, the first Stromer with a belt drive and hub gears integrated into the motor, and the continued improvement of quality and customer service standards. In addition, the output of the three assembly lines in Oberwangen is to increase by 40% and a new ERP system is to be implemented throughout the company. There is great anticipation surrounding the revival of the rear-wheel drive currently being experienced on the market. Competition is good for business, after all. Stromer’s top maxim in the next decade continues to be building the best S-Pedelecs and inspiring people to use them every day. 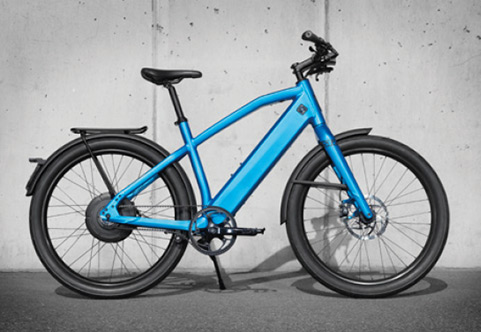 Design of the new Stromer ST2.